The Season in Review

The 2021-2022 ski season saw a general return to normalcy at the North End with fairly routine comings and goings on the trails and at the trailhead and cabin. Prior to the season the club invested in widening and modifying several segments of the North End B loop, which opened up the trail, softened a sharp turn, and tempered the turn at the bottom of the big hill just before the Birkie Trail. These efforts made the trail easier to groom and improved skiing.

The North End Snowshoe Classic saw 50 runners and walkers take part and came off without a hitch. The North End Classic ski race  went flawlessly, though our participation was down from previous years, perhaps due to COVID and or the race taking place on a different weekend. Next year’s race will return to its traditional weekend, two weeks before the Birkie and the same weekend as the Pre-Birkie, on Sunday, Feb. 12.

It was a pleasantly uneventful season with regard to our grooming equipment, with no major breakdowns or repairs, though there was an unfortunate tree versus groomer encounter that provided the opportunity to learn how to reinstall the rubber track on the UTV. Our grooming crew grew to 11 volunteer groomers with the addition of Dave Gorringe, complementing our experienced team comprised of Lon Anderson, Ron Bergin, Irv Berlin, Tom Cogbill, Jim DeRoma, Ed Johnston, Dan Malesevich, Metro Maznio, Dave Tomasula, and John Uffenbeck. Throughout the season the North End trails regularly received glowing, appreciative reviews of their efforts.

Snowfall was reluctant, but adequate through the first two and a half months of the season, with a consistent four- to five-inch base that provided surprisingly good skiing. The balance of the season saw abundant snow and excellent conditions, only to have the ice storm and 50 degree weather prematurely slam the door on the season. Our final grooming took place on Saturday, March 26. In the end, it was a solid winter of skiing.

The North End Ski Club is grateful to our many members, donors and sponsors who help support our efforts, and without whose assistance we could not accomplish what we do to make the North End a special place.  Thanks to everyone – we’ll see you on the trails next season. 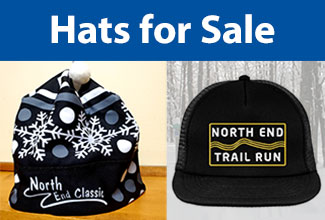